As mentioned in Jim Dawson’s book Swords of Imperial Japan 1868-1945, Cyclopedia Edition on page 350, “In 1914 the Japanese navy captured the islands that later became the Nan’yo Colony, and, initially, the navy administered the islands.”

The Nan’yo Colonial sword has the unique wreath and cherry blossom emblem on the backstrap ears.  On the same page 350 in Dawson’s book, it further reads “Naval Uniform Regulations show boar’s eye cut-outs on [the scabbards] of hannon level swords, but all such swords knows to the author have ‘U’-shaped cut-outs.” 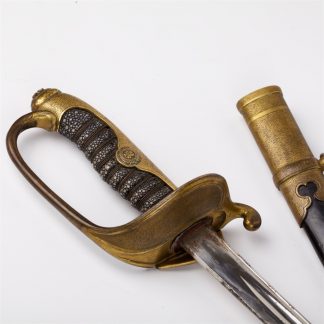